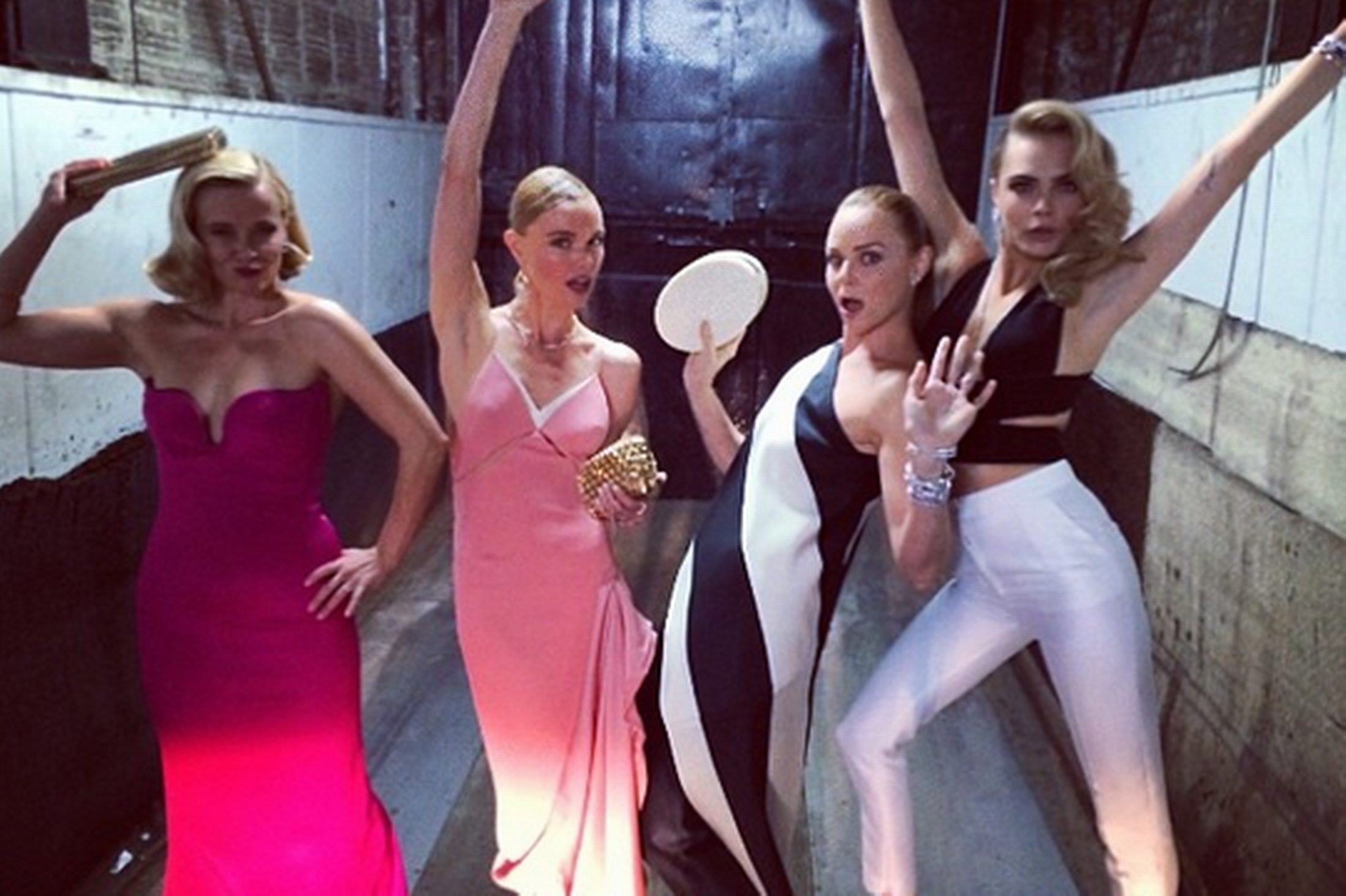 On Monday night, at the Metropolitan Museum of Art’s annual Costume Institute gala, there were ball gowns, leg slits, white ties and trousers. Lots of trousers – and we’re not just talking about the men, nuh-uh. Not everyone opted for dresses at the Met Gala 2014 – here are the gals who looked just as glam sans ball gown… 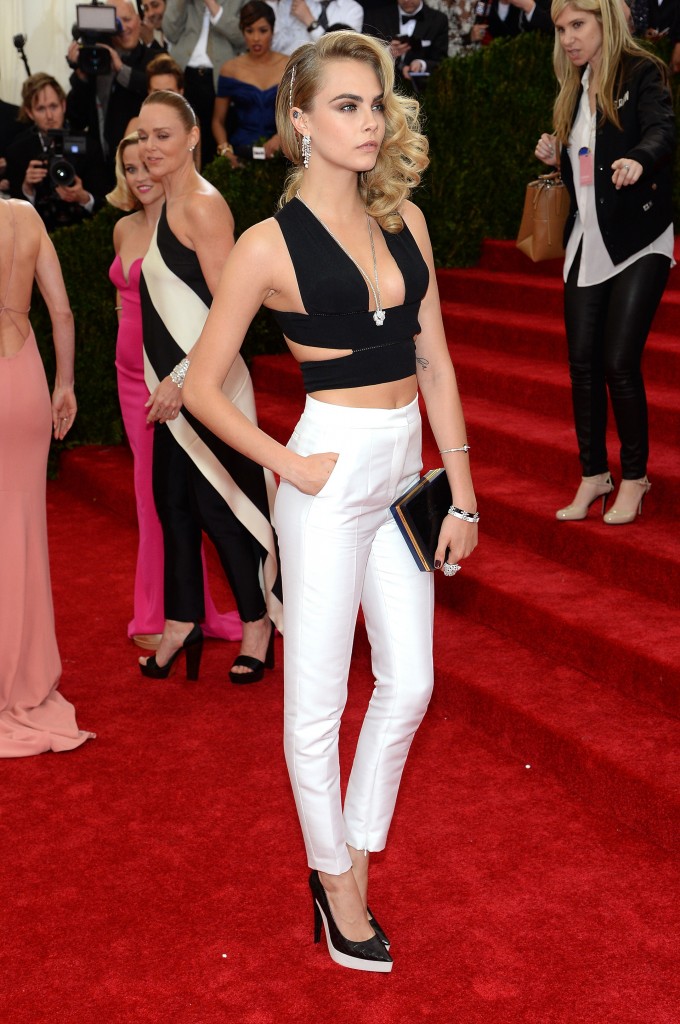 No real surprise that Cara Delevingne wore trousers on the Met Ball red carpet. She’s been doing it for some time now and chic suiting is her signature ‘dressed-up’ style. Plus, it suits (HA!) her tomboy tendencies a treat.The rubber-faced model ticked off a few key Met Ball 2014 fashion trends in one look in her Stella McCartney ensemble: tailored trousers (and ergo, pockets), cropped top and (yawn) monochrome. How terribly clever. 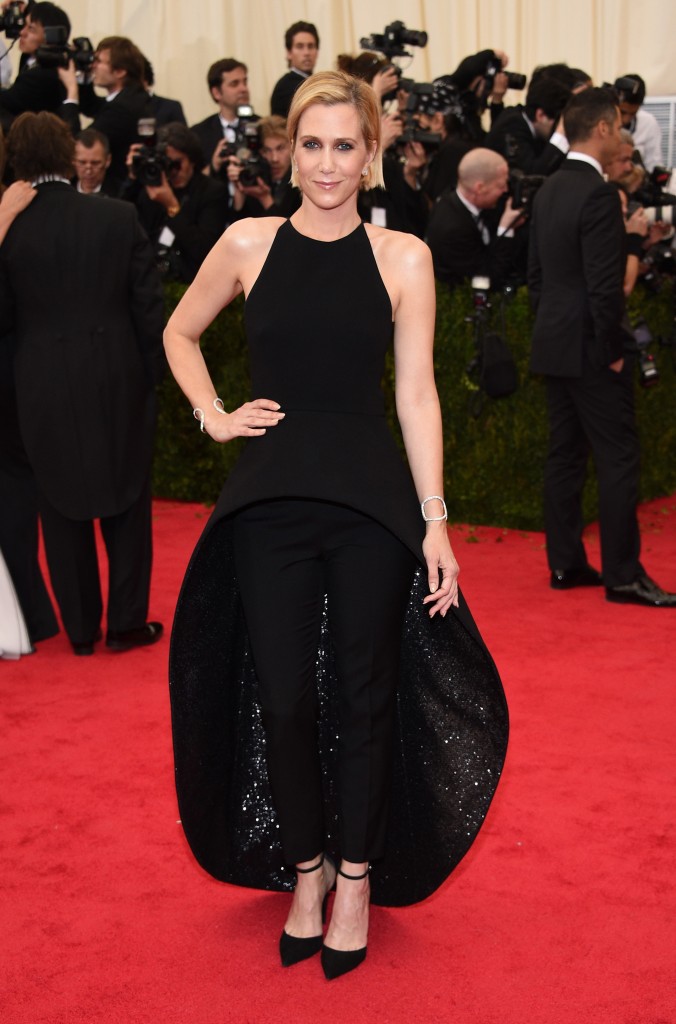 Kudos to Kristen for her dress-over-trousers combo by Alexander Wang for Balenciaga. Despite Emma Watson’s much .talked about turn in Dior Couture at the Golden Globes 2014, this is one 90s throwback that hasn’t quite made a comeback we, as massive Alisha’s Attic/Gwen Stefani fans, had hoped for. MAKE IT HAPPEN ALREADY. 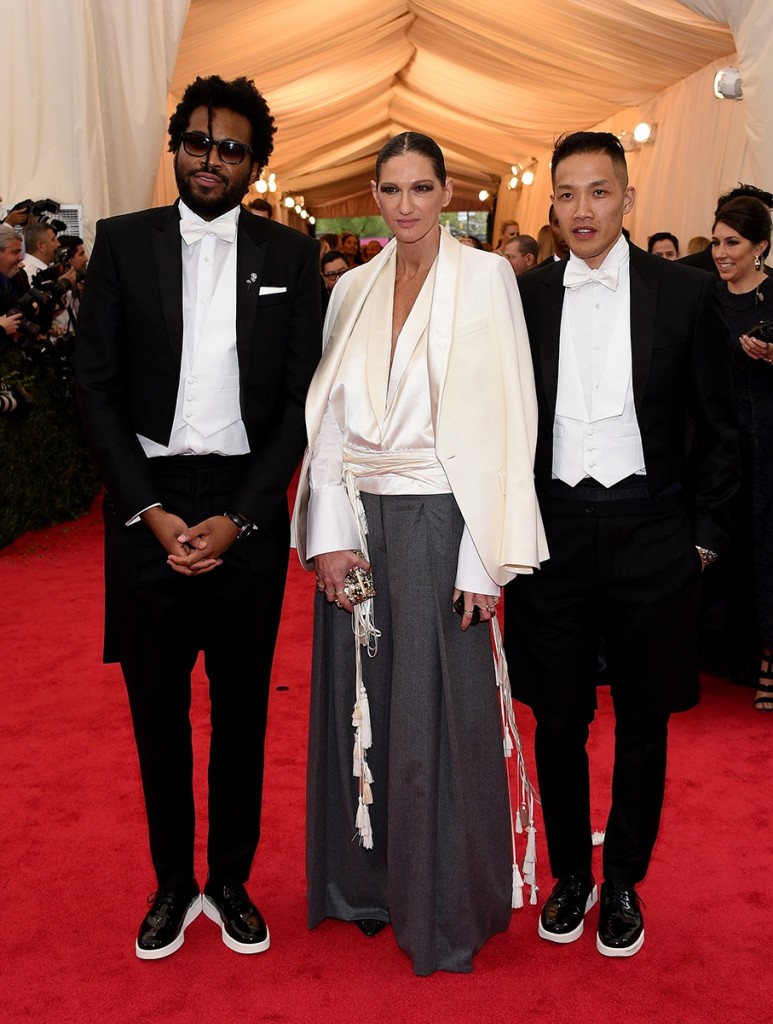 J Crew’s Jenna Lyons (AKA our Style GURU) also donned trews, showing off her interpretation of the white-tie-and-tails look the men were told to wear. Although her satin strides were Princess Jasmine-style voluminous, nodding a bit more towards ball gown territory. Plus expert shoulder robing (so FASHUN). 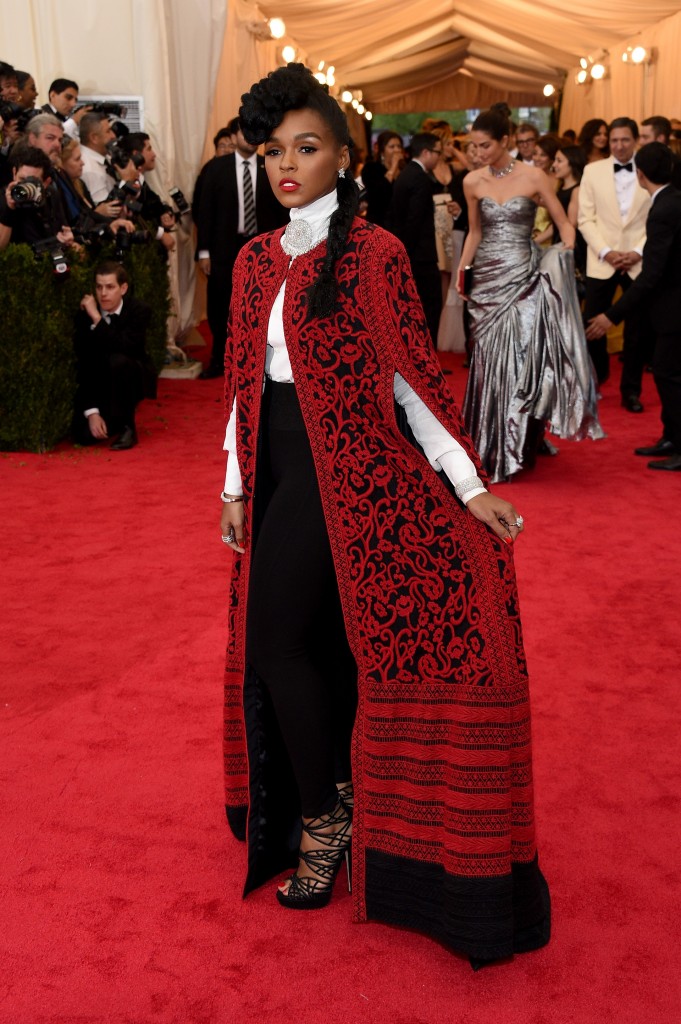 We’ve always admired singer Janelle Monáe’s androgynous style, and naturally she was wearing her trademark tailoring on the red carpet for the Met Gala 2014. But can we talk about that cape? In an instant, her red and black Tadashi Shoji number takes her from zero to hero, because there is nothing more DRAMATIC! And MYSTERIOUS! Than a swishy statement cape.

[Florence ‘and-the-Machine’ Welch also got in on the act in an AMAZING Valentino cape complete with beautiful applique butterflies, as did Maggie Gyllenhaal in a pop-art inspired cape also by the Italian designer. We’re putting it out there: Capes are where it’s AT.] 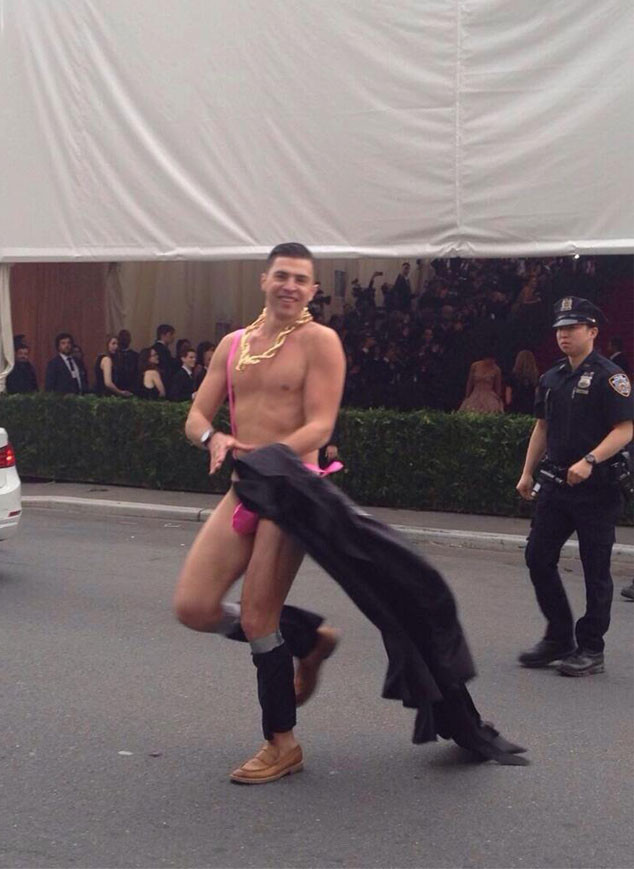 It ain’t a proper fashion shin-dig without the obligitory streaker, right? And at least he accessorised with a bit of bling, eh? 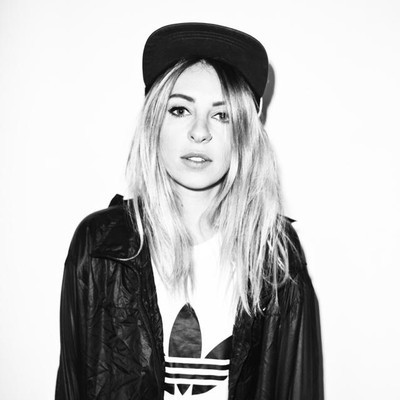 What’s big in our box // Alison Wonderland – I Want U 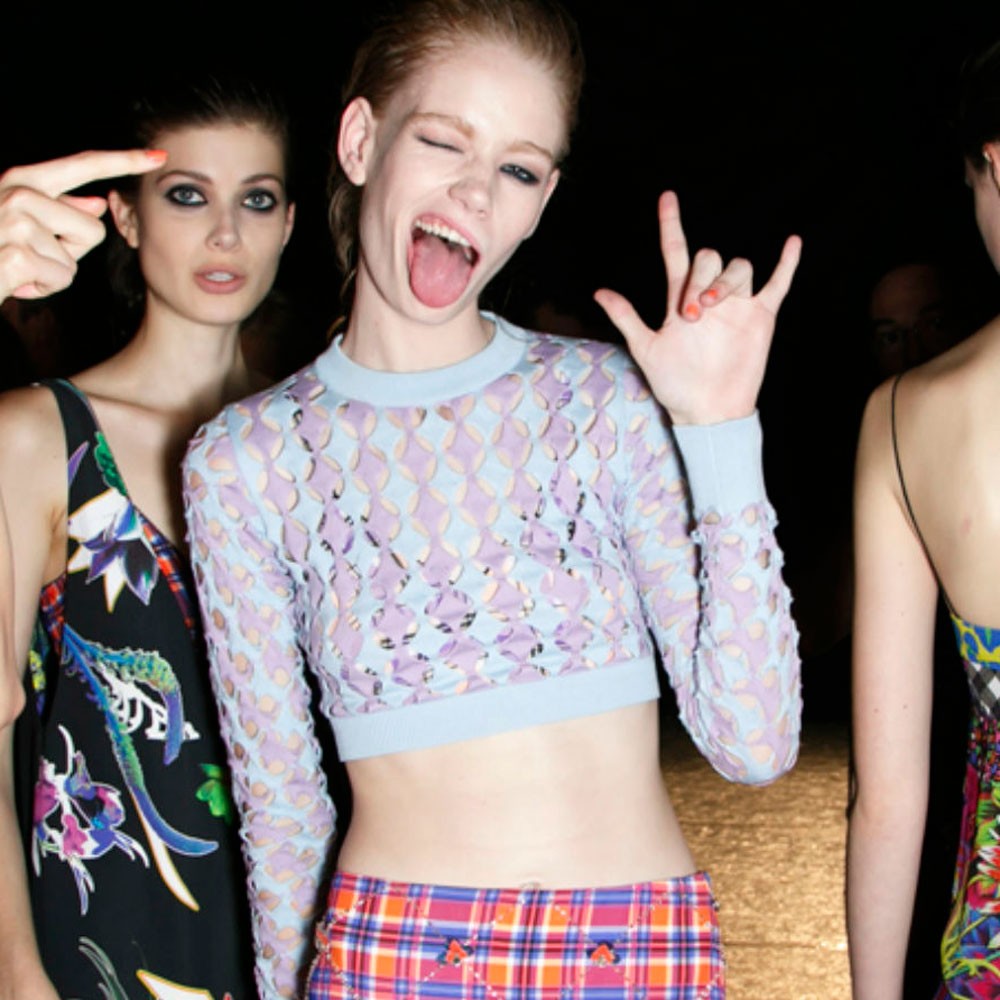 Top of the crops // A crop top for every occasion 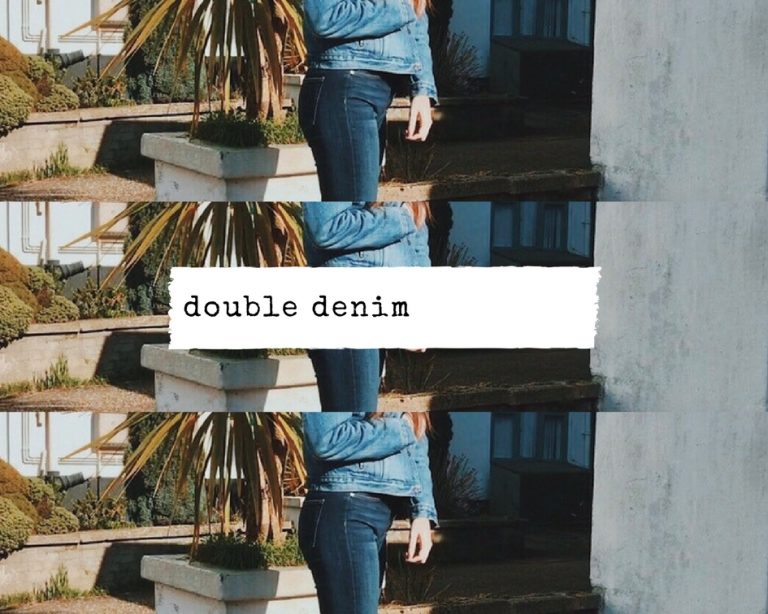